Earlier this year, a U.S. driver was killed when his Tesla crashed into a truck. The driver was using a semi-autonomous technology called "autopilot mode" at the time of the crash. Chances are, he was also watching a movie and not paying attention to the road. Clearly, this Tesla driver did not understand the limitations of autopilot mode.

And according to a recent survey, many Canadian drivers also do not quite comprehend semi-autonomous technology limitations. 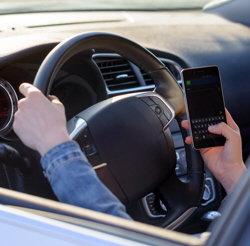 The Traffic Injury Research Foundation in partnership with the Toyota Canada Foundation conducted this survey. Here, it was revealed that many Canadians would engage in dangerous behaviour while behind the wheel of semi-autonomous vehicles.

It was also discovered through this study that Canadians would be most interested in using semi-autonomous technology under difficult conditions. They feel that these features would be most helpful when the weather is bad, traffic is heavy or if road conditions are poor. However, according to experts, these are the conditions under which automated technology is most likely to fail.

How Semi-Autonomous Technology is meant to be Used

Clearly, if the purpose of semi-autonomous technology is to make the roads safer, more consumer education is needed. In a statement on the above-mentioned survey, Toyota Canada Vice-President Stephen Beatty has said:

"This study tells us that we as an industry still have lots of work to do when it comes to educating drivers about the capabilities and limitations of the technology. Our view is that advanced safety technology is meant to enhance a driver's control of their vehicle, but that it is not a replacement for a knowledgeable and attentive driver."

Semi-autonomous technologies such as lane-keeping and forward collision warning systems are fairly common these days. And it seems like these kinds of features will gradually become more advanced until fully autonomous vehicles are available. With this in mind, drivers should be fully informed about what current automotive technology can and cannot do for them.

Basically, until it is absolutely certain that cars can drive themselves, no one should be sleeping behind the wheel.

Because Vehicles Don't Finance Themselves Either

If you have damaged, thin or no credit, getting approved for an auto loan can be difficult. However, Canada Auto Loan can help you get financed to buy the car you need. We can match you with a dealership in your area that is connected to the right kinds of lenders. This means that you can be approved and back on the road in no time.

There is no charge for the service we provide and there are no obligations. You really have nothing to lose by letting us show you how easy and hassle-free car buying can be. So go ahead and fill out our simple and secure online application to get started today.