We've all been there before. You stop at a traffic light needing to make a right turn and the intersection is free of other vehicles and pedestrians. Even though it would be perfectly safe to make the right turn, residents of the Island of Montreal are prevented from doing so. Soon, this may no longer be the case.

In mid-December, the Mayors of the 15 Montreal island suburban cities formally asked the Quebec government to authorize right turns on red. The practice isn't allowed on the island but has been legal everywhere else in the province for the last 13 years. It is also the only Canadian region where this practice is outlawed. 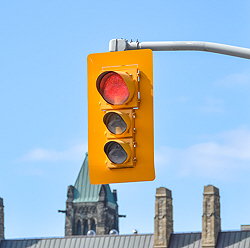 Three representatives spoke on behalf of the 15 suburban cities on the Island of Montreal.

They sent a letter to Quebec Minister of Transport Laurent Lessard requesting right turns on red be made legal. According to a recent survey, the request is what the majority of residents of the island want.

In November, CROP Inc. surveyed residents living on the Island of Montreal. 1,000 people responded. The survey showed that three out of four people are in favour of implementing right turns on red.

The Mayors are committed to make sure this would be implemented in "the spirit of safety." They also cited that driving habits in Quebec have improved over the past four decades. Road safety statistics show that deaths have gone down over a period when the number of drivers and vehicles on the roads has greatly increased.

The Mayors acknowledge that "every accident death is one too many." However, they believe right turns on red can be safely carried out on the island.

Benefits of Right Turns on Red

The Island of Montreal has over two million vehicles. Also, in 2011, Montreal had the second most days of poor air quality in all of Canada.

Drivers who are forced to wait at a red light are wasting their time and contributing to traffic congestion. Not to mention they are wasting gasoline and, therefore, polluting the environment. 62% of contaminants found in the atmosphere are related to road traffic according to the Ministry of Transport.

It remains to be seen whether or not right turns on red will become authorized on the Island of Montreal. The Mayors of the suburban cities there believe a lot of good could come from doing so.

Regardless of whether or not right turns on red are made legal, most people need a vehicle to go about their daily lives. If you need an auto loan but feel like your credit will keep you from being approved, think again.

Canada Auto Loan helps people with good, bad or no credit find auto loan financing. Our service is free and our process is fast. We can help you next if you complete our secure online application.