On July 22nd, 2016, a customized Honda Sonic Civic Sedan made its debut at SEGA's Sonic the Hedgehog 25th Anniversary event at San Diego's House of Blues, as part of the 2016 San Diego Comic-Con.

As the beloved game Sonic the Hedgehog™, commemorates its 25th year, SEGA® teamed up with Honda to create a one-of-a-kind Sonic Civic Sedan to celebrate the legendary video game character.

According to Honda, "The Sonic Civic embodies the spirit of the Sonic the Hedgehog classic video game, whose main character, Sonic, and Sonic's world, is featured on and throughout the modified vehicle." Designed and customized by Fox Marketing Cars, a U.S. company based in York, Pennsylvania, the Sonic Civic is based on the turbocharged 2016 Civic Touring Sedan, and includes the following custom features: 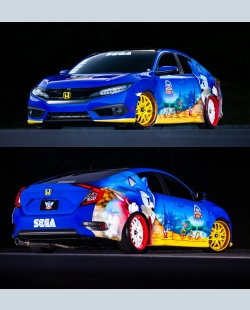 And, of course, Honda was very excited about the event: "What better way to showcase the incredibly sporty performance capability of the 10th generation Civic than by pairing it with gaming industry's ultimate athlete - Sonic the Hedgehog," said James Jenkins, Public Relations Manager for the Honda Division. "As the fan favourite game and character celebrates his 25th anniversary on the scene, we hope that all Sonic fans - those who remember playing years ago and those who continue playing today - rejoice in his all-new ride, as much as we enjoyed creating it."

Not only has the Civic been named 2016's North American Car of the Year, it has been ranked #1 out of 23 compact cars by U.S. News and World Report, and has been a leader in the compact car segment for decades. The 2016 Honda Civic features some serious upgrades and features new Honda direct-injected turbo engine technology, class-leading EPA-estimated fuel economy of up to 5.6 l/100km highway, advanced Honda Sensing™ safety and driver-assistive technology, and the latest in connected-car technology, including both Apple CarPlay™ and Android Auto™.

Also featured in the reimagined Civic lineup is the seriously sporty 2016 Civic Coupe, and the Civic 5-door Hatchback will launch later this year. The lineup will be capped off by the 2017 launch of high-performance Civic Si variants and a radical new Civic Type-R, topping off the sportiest, most expansive model lineup in the 44-year history of the Civic.

There's definitely a lot to celebrate, and even car buyers who may find the latest models out of their price range can be part of the celebration through the purchase of more affordable, late model Civic Sedans.

The Affordability of the Honda Civic Sedan

According to VMR Canada, these are the estimated starting prices for used Civic Sedans from 2011 to 2015 based on the assumption that a pre-owned Civic would average around a minimum of 25,000km per year. Actual prices may vary on location, demand, features and actual mileage.

With plenty of models and trim levels to choose from, it shouldn't be a problem finding a Civic model that fits within your budget.

When Finding Auto Financing Is a Challenge

If you have been running into problems finding a dealer willing to work with your unique credit or financial situation, Canada Auto Loan is ready to help. We have a countrywide network of auto dealers who work with lenders who are experienced in subprime auto financing, and we can connect you with one in your local area fast.

All you need to do is complete the fast, secure and obligation-free online application. You have nothing to lose, and everything to gain. You're only a click away, so start today.