If you are having a difficult time finding the used vehicle that you want at the price you want to pay, blame the Americans. Or, more specifically, you should blame the sagging loonie for making used Canadian vehicles cheaper for American buyers.

Because the U.S. dollar is currently stronger than the Canadian dollar, Americans may be able to get more "bang for their buck" by importing a used car from Canada. And they are (ahem) capitalizing on this situation, causing used Canadian vehicles to retain higher values for longer. This is why you are paying so much for previously owned automobiles.

It isn't just the random buyer from Michigan or New York who is crossing the border to snag a bargain. Last year, U.S. auto dealers imported 200,000 used vehicles into the United States. These dealers are actively combing Canadian auctions for highly sought-after vehicles, concentrating primarily on trucks and SUVs. This has resulted in a 6.3 per cent decrease in depreciation among the 11 top-rated four-year-old trucks, SUVs and vans on Black Book's most recently published list. 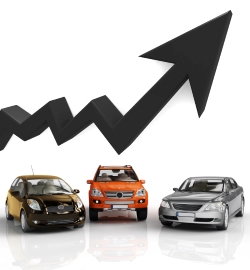 To put this in prospective, consider the following example. If you are in the market for a 2012 Jeep Wrangler, you will find that this particular model has retained 79 per cent of its original manufacturers' retail price (MSRP). This is incredible because, on average, during a "normal" market climate, a new vehicle will retain about 65 per cent of its value in the first year.

So, it is unlikely that you will be able to purchase a four-year-old Wrangler right now at a very good price. In fact, at this point, you may be better off buying a new Jeep Wrangler.

Where is the good news in all of this? Well, if you have a recent model truck, SUV or van to sell or trade in, you will probably be very pleased with how much you will be able to get. Just make sure that you know what the current asking price is for your vehicle to ensure that you get the best deal possible.

Commenting on the recent surge in used vehicle prices, Josh Bailey, Black Book's vice-president of research and editorial stated that "The same phenomenon occurred the last time the dollar tumbled." Bailey went on to suggest that the issue is more noticeable this time around because of an increased demand in the U.S. for used product.

But the key point is that this is hardly the first time that the loonie has fallen in value, and it will probably not be the last. Once the Canadian dollar is strong again (and it will be), used car prices should go back to normal. In the mean time, you can probably get a decent deal on a used vehicle by shopping around and by being open to several different buying options.

If you are going to pay a little more for your used vehicle, you will certainly want to make sure that you get the most affordable financing possible. And Canada Auto Loan can help you get approved for a reasonable auto loan. Even if you have severely damaged credit, we can connect you with a dealer in your area who is qualified to handle your particular situation. Our service is completely free of charge, and our process is fast and discreet.

Just fill out our simple and 100% secure online application to get started today.