The Automobile Journalists Association of Canada (AJAC) kicked off the Vancouver International Auto Show by naming the Chevrolet Volt the 2016 Canadian Green Car of the Year (CGCOTY).

The 2016 Chevrolet Volt was presented with the 2016 CGCOTY award at the opening ceremonies of this year's Vancouver International Auto Show, which ran from March 23 to March 27. It beat out fellow finalists, the 2016 Honda Civic and the 2016 Hyundai Sonata Hybrid. 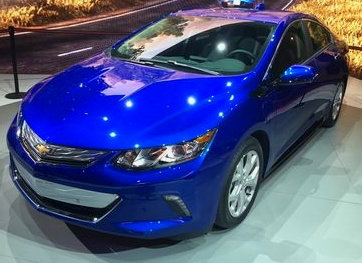 The Volt, a plug-in hybrid, was selected by AJAC after days of rigorous testing and evaluation at their annual TestFest event. More than 70 of Canada's top automotive journalists gathered at TestFest to test drive, evaluate, and vote on several awards that the association hands out.

The Green Car entries were selected from eligible vehicles in the running for the Canadian Car of the Year program. What qualifies a vehicle as "Green?" According to AJAC's guidelines, it's when - for its size and purpose - the vehicle provides the Canadian consumer with environmentally-friendly returns that compare favourably with other vehicles in its class.

Chevrolet of Canada brand director Laura Pacey had this to say after the Volt won the award: "Chevrolet is honoured to receive AJAC's Green Car of the Year award, as it reinforces our commitment to being a leader in electrification. The second-generation Volt is a no-compromise electric car, delivering up to 85 kilometres of EV range, greater efficiency and stronger acceleration, making it the most innovative plug-in vehicle in the industry."

General Motors earned this award with the ultra-impressive 2016 Chevrolet Volt, which hit the retail market in October of 2015. Here are a few of its notable features and specifications:

The Volt makes a great choice for anybody looking to reduce their environmental footprint and save money on gas. However, its starting MSRP tops $40,000, which means that it falls out of the price range of many consumers with less than perfect credit.

Fans of Green vehicles that have bruised credit ratings may have better luck financing another CGCOTY finalist. The 2016 Honda Civic, which won AJAC's Canadian Car of the Year award, is much more affordable with a starting MSRP of $15,990.

If you have imperfect credit and are seeking auto loan financing in Canada, we can help. Canada Auto Loan has a network of experts inside the leading dealerships throughout the provinces and territories, so we know exactly who can help when you need hassle-free auto financing. Get the process started by completing our free and easy online application today!